Believe this – Hidden and Politically Suppressed Truth of Taj Mahal 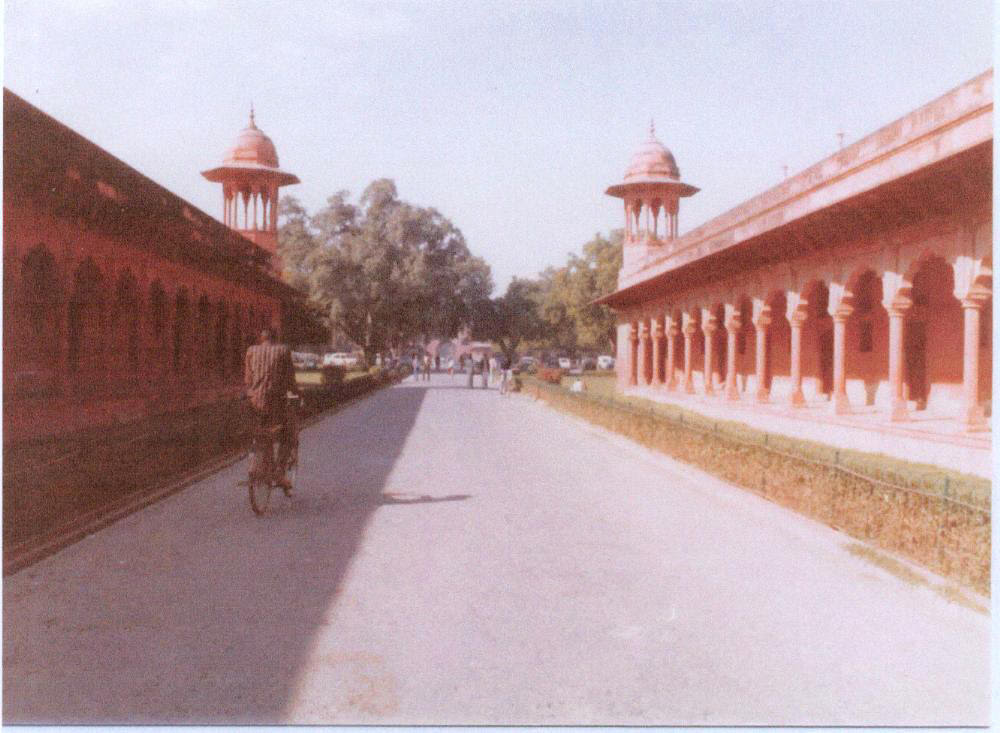 Inverted water-pots on top. Their number is always odd, 11 in this case, typical of the Vedic system. Notice also the cobra design in pairs below the gallery. Koranic inscriptions were a graffiti added by Shahjahan. 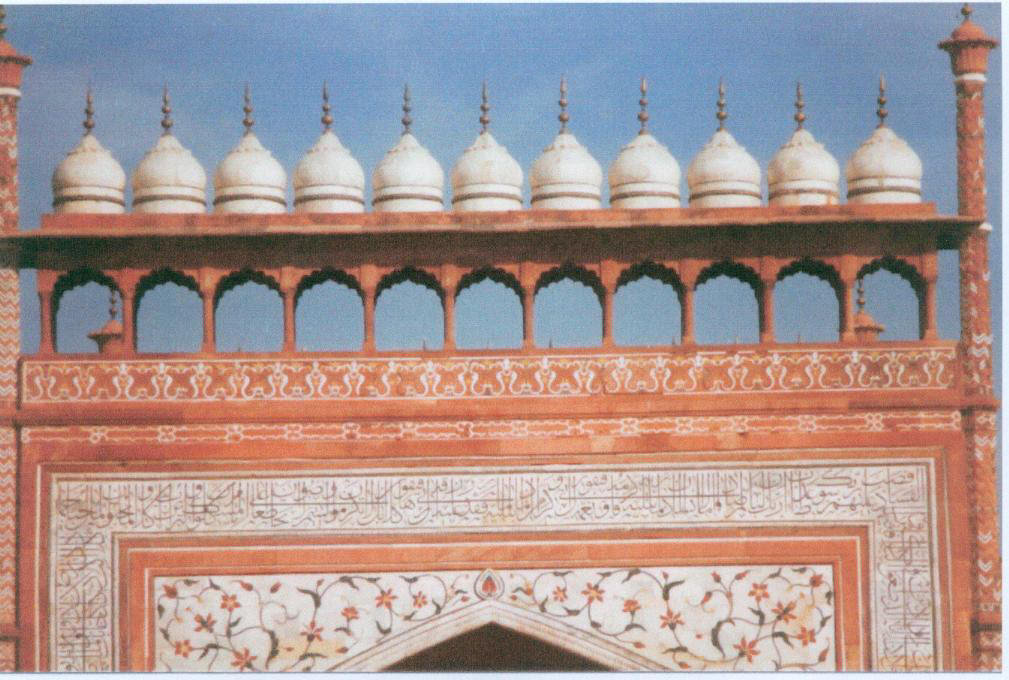 Wall decorations as we see here are typical Rajput style. There is also a balcony at first floor level. 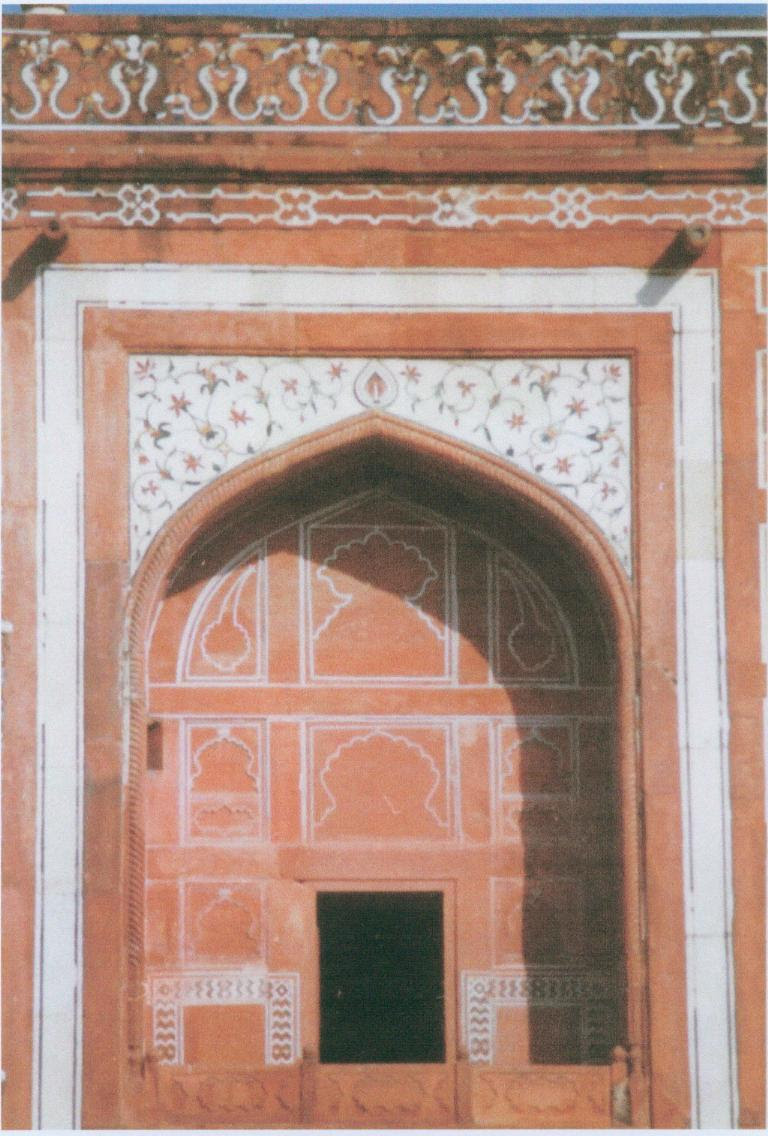 Note the Trident within the lotus form at the apex. Both of which are Vedic references, the trident being connected with Lord Shiva. 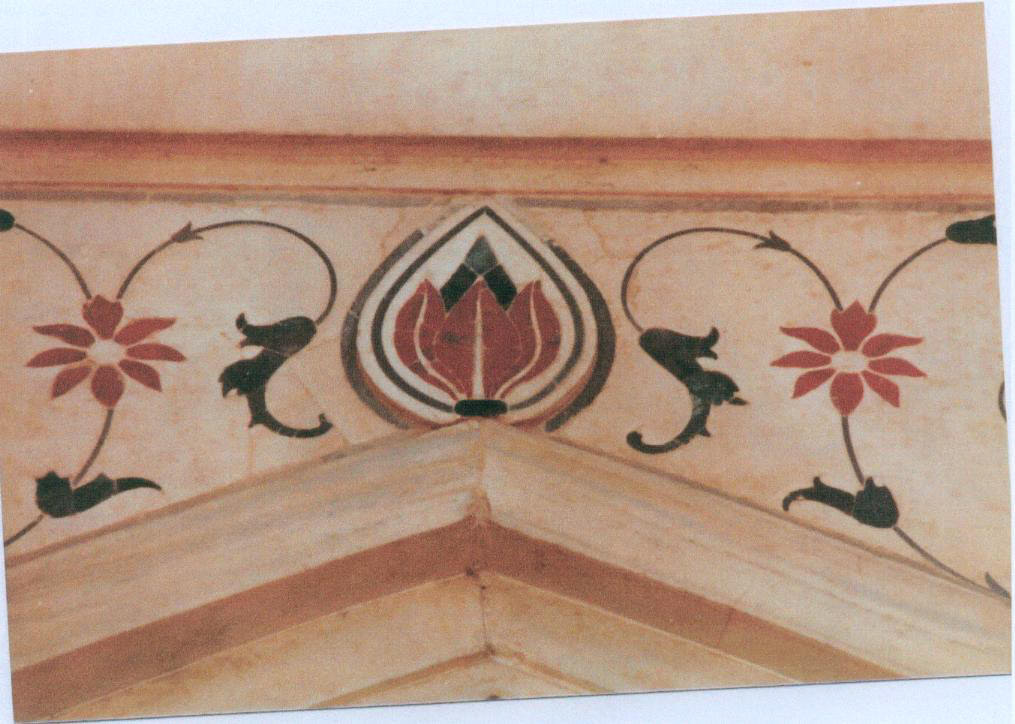 You can see blocked doorways and windows where there are several rooms in the 19 foot high plinth. This would be where entrances would lead to many pathways to the rooms within. 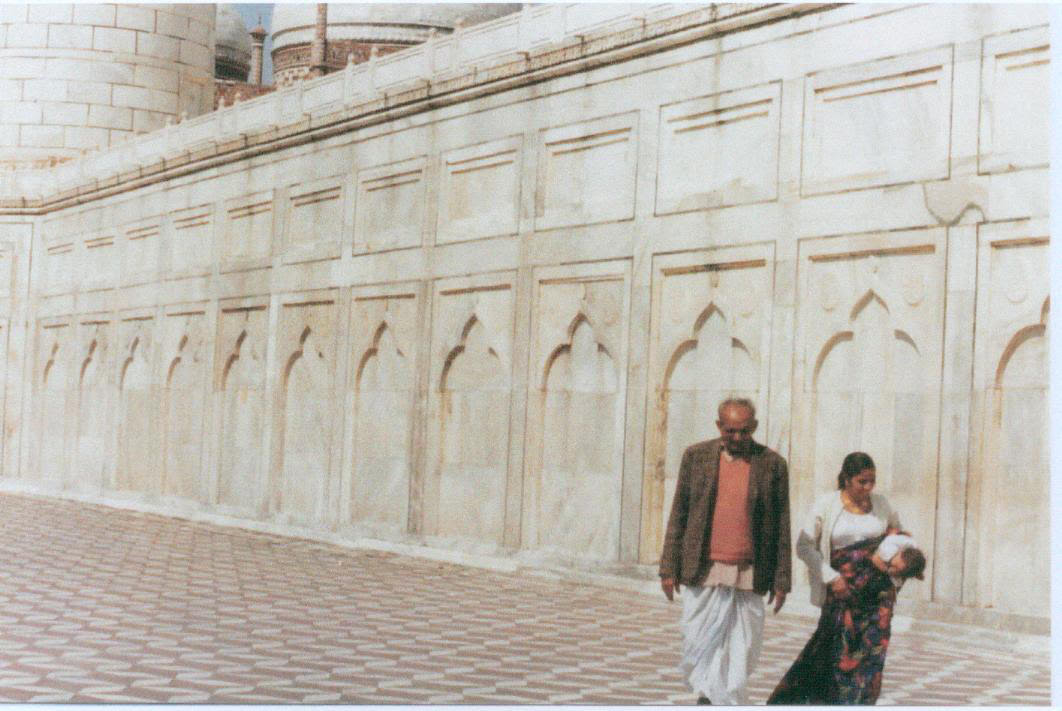 We are now outside the Cenotaph Chamber. Note how the steps in plain marble break up the designs on the plinth wall. This means that they are not original. 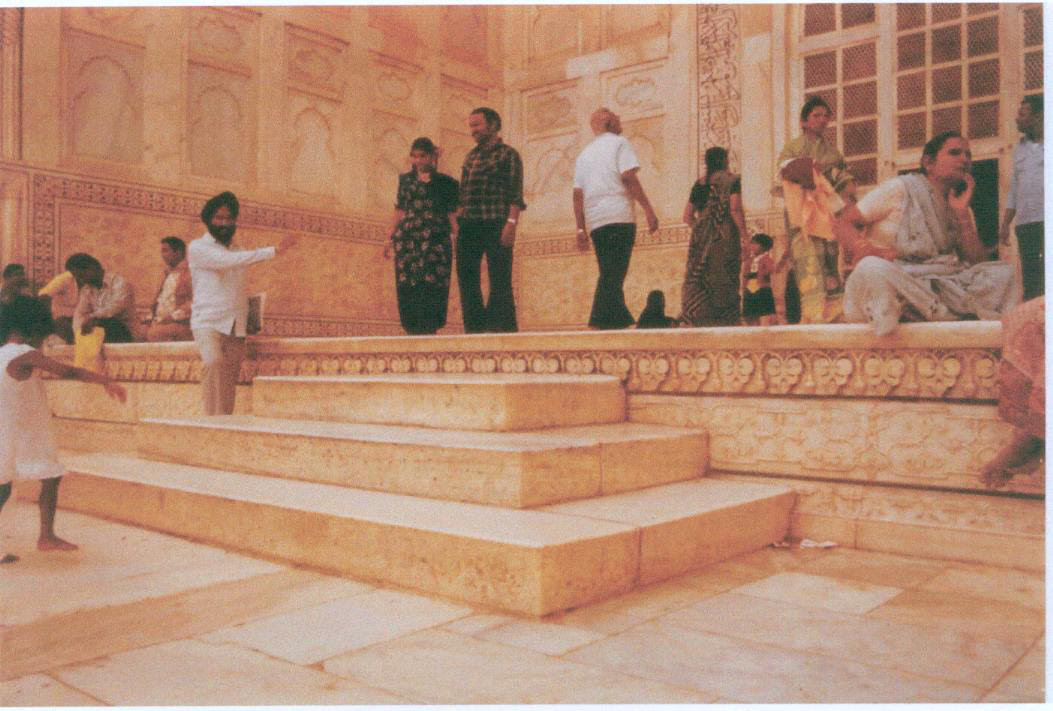 The Cenotaph chamber with marble screen. The point is why have an octagonal screen around two graves? It is more likely to have been an area of where sacred activities once took place. 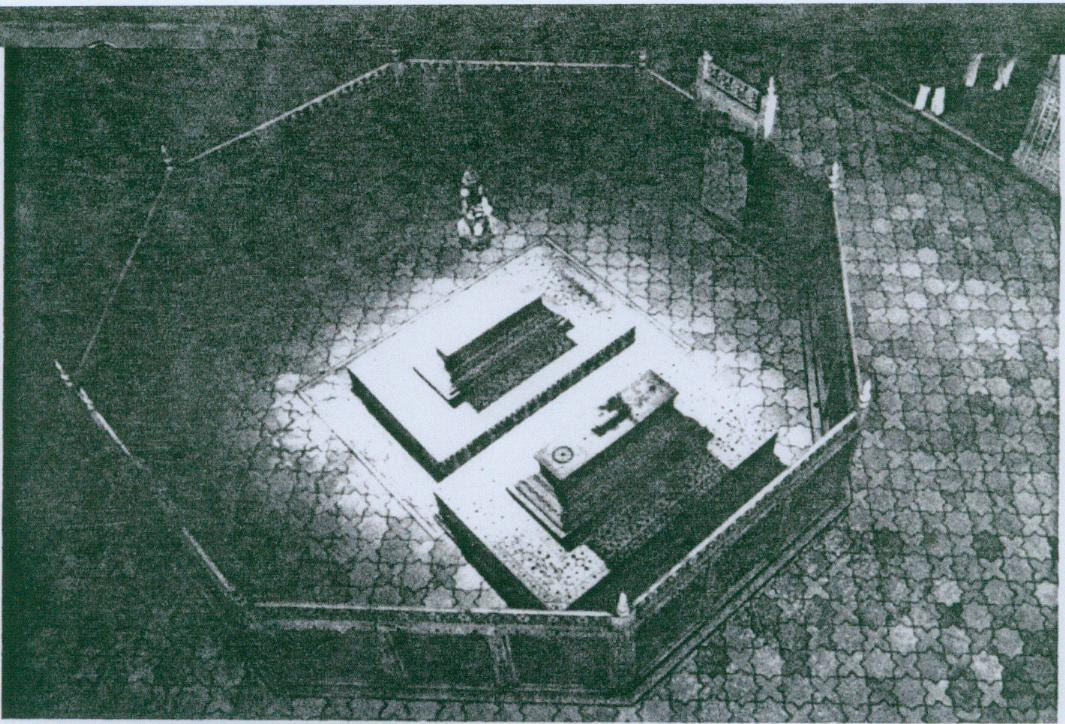 The Cenotaphs, or the supposed graves of Shahjahan (on the left) and Mumtaz.
If the tiles on the graves can me mimiced with the design on the outside then the scripting of the kuran can also be mimiked thats a point to note 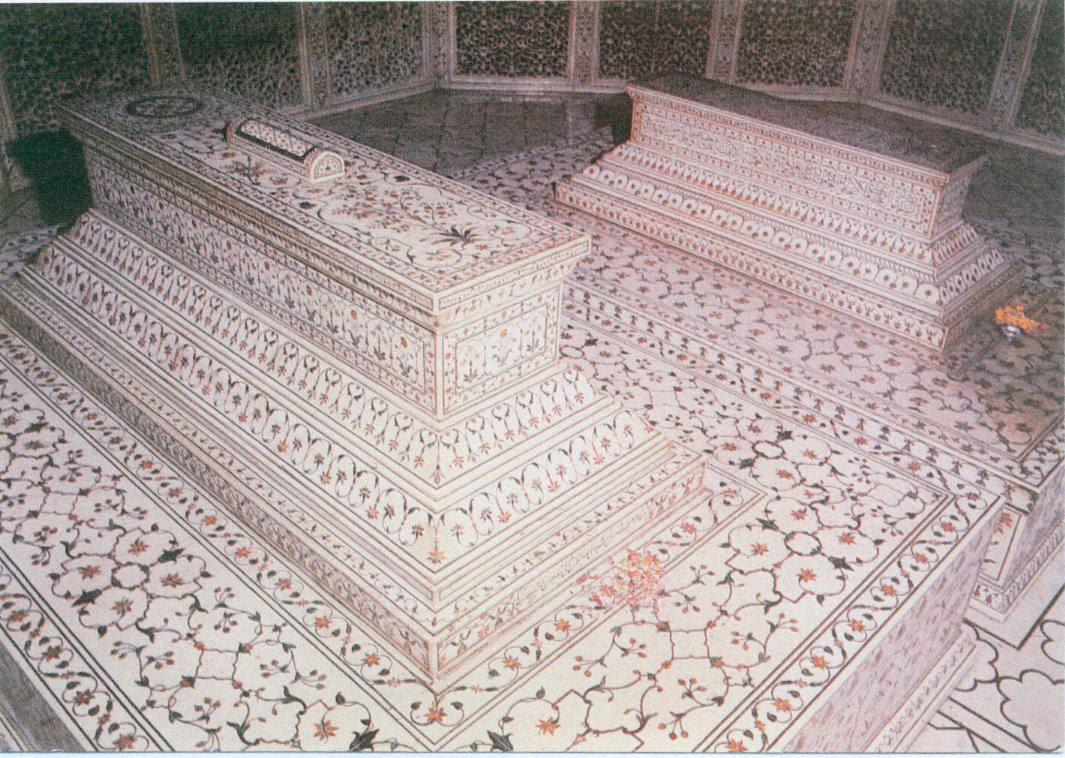 The Vedic style design on the under-side of the dome over the central cenotaph chamber. Note the blazing sun surrounded by circle of Tridents, which are definite Vedic designs. 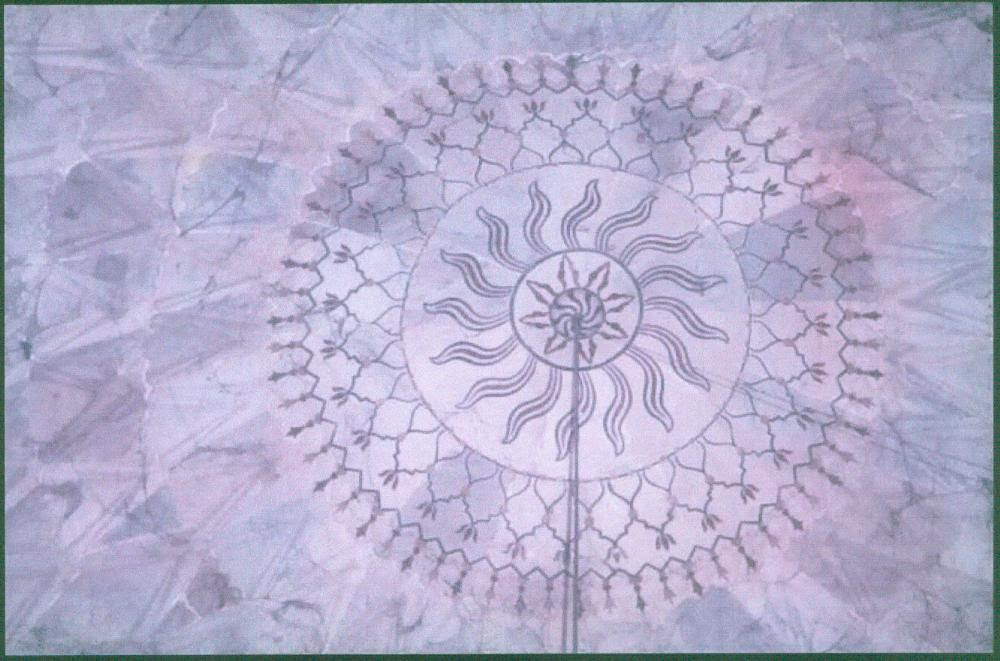 he interior of the so-called Mosque at one end from the Taj with evidence it was converted later into a mausoleum. Steps were for the Mullahs to preach. But see how they break the pattern of decoration on the wall and also on the floor. This means that these steps are not original, but were put up when this building was converted into Mosque by Shahjahan. Also, when praying in this building, Muslims would face West, i.e. Bandar Abbas in Iran, NOT Mecca as is more correct. 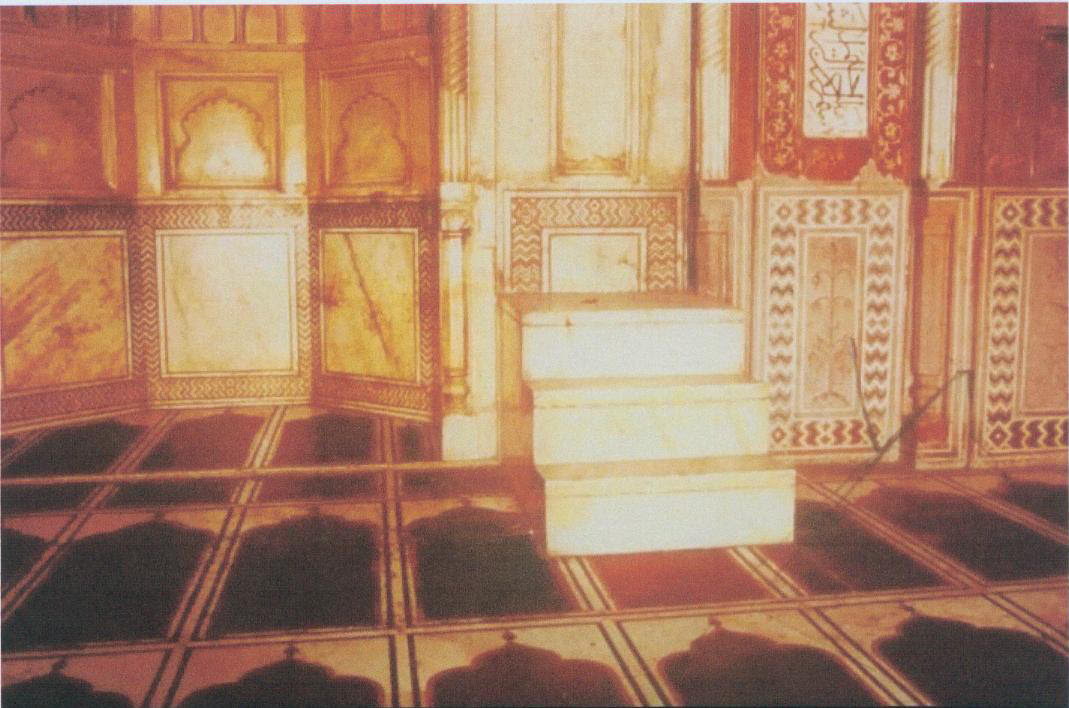 Survey plan of Taj Mahal by Col Hodgson, 1825. Note the platform on the north side running from N/W to N/E tower and steps at two places from this platform to go to the river: a sure sign of planning for residential activity, not what you would need for a vacant mausoleum. 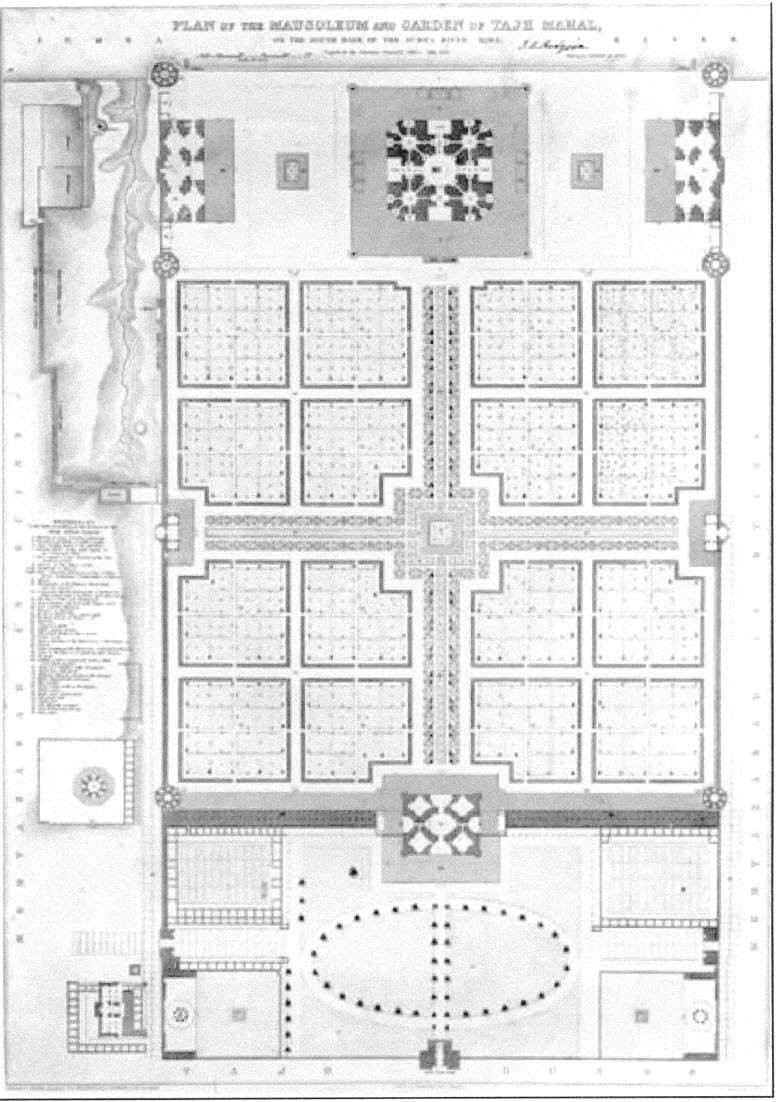 Blue print of the Taj Mahal showing cross-section of Central Edifice in a book by J Fergusson in 1855. It clearly shows the hidden basements 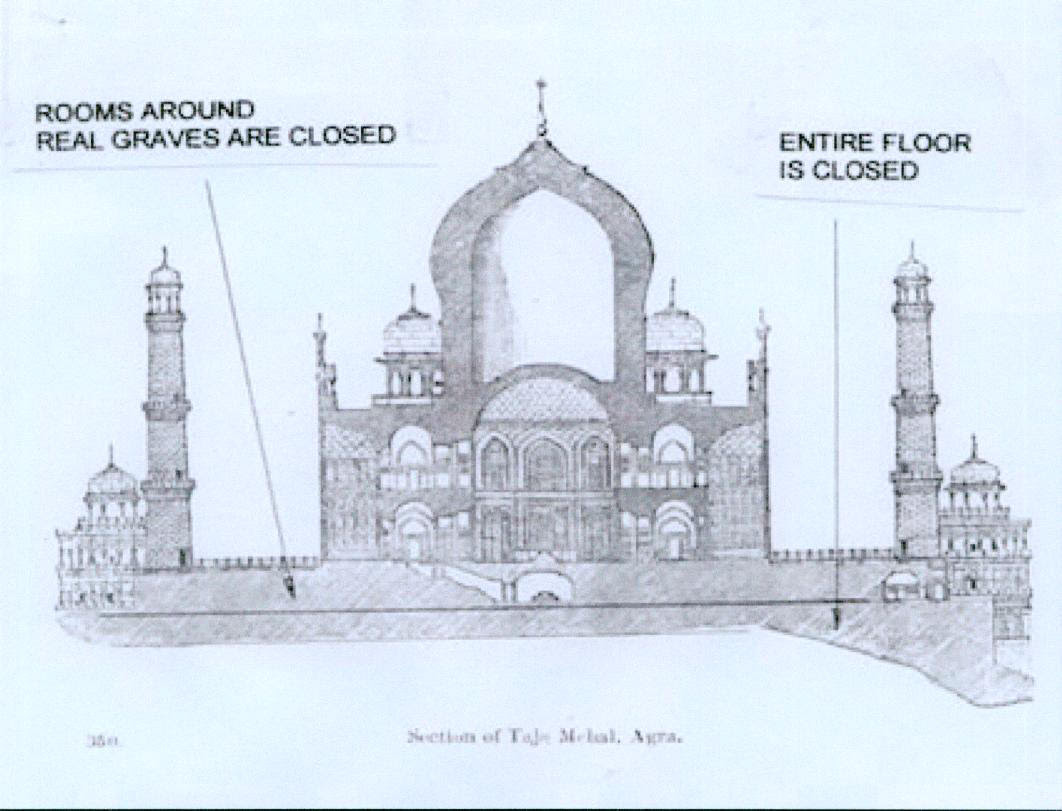 Entrance to lower basement floor that is now bricked up. 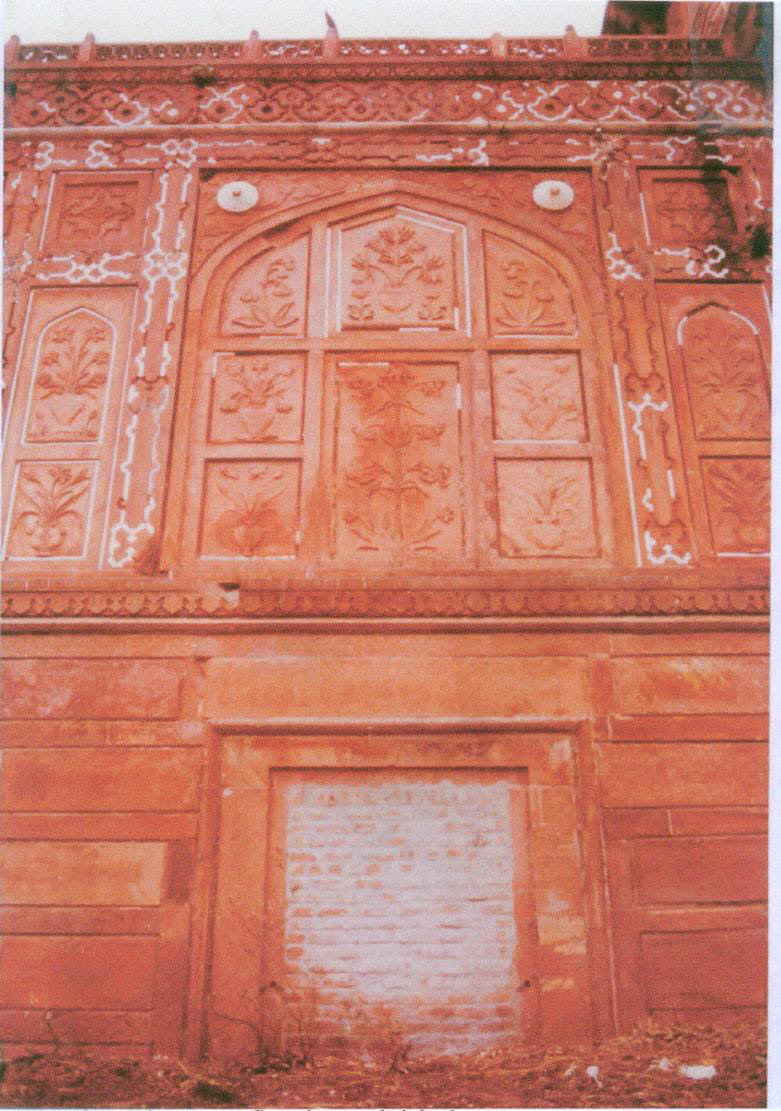 The timber door before it was sealed up with bricks. In 1974 American Professor Marvin Mills took a sample from this door for Carbon dating and concluded that the Taj Mahal pre-dates Shahjahan. After this revelation, the Government of India removed the timber doors and the openings were bricked up, as shown in the previous photo. 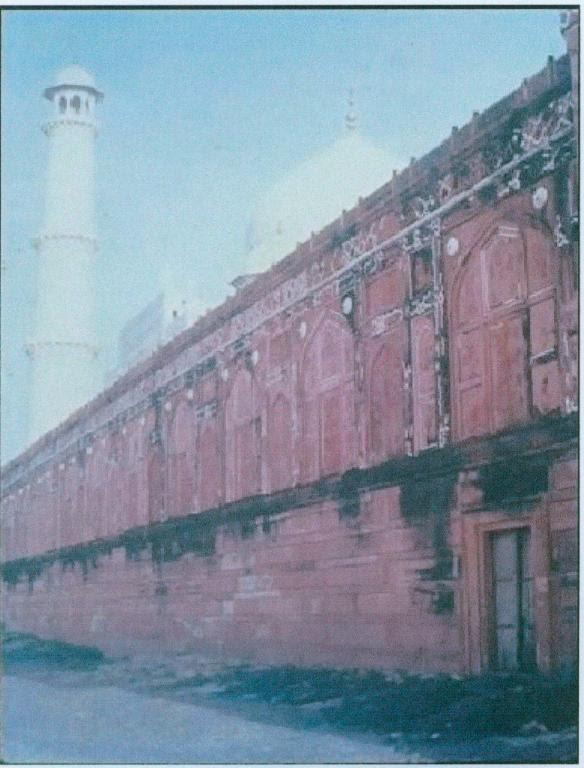 After we climb down the steps we see a doorway to the passage on right of the hidden rooms. 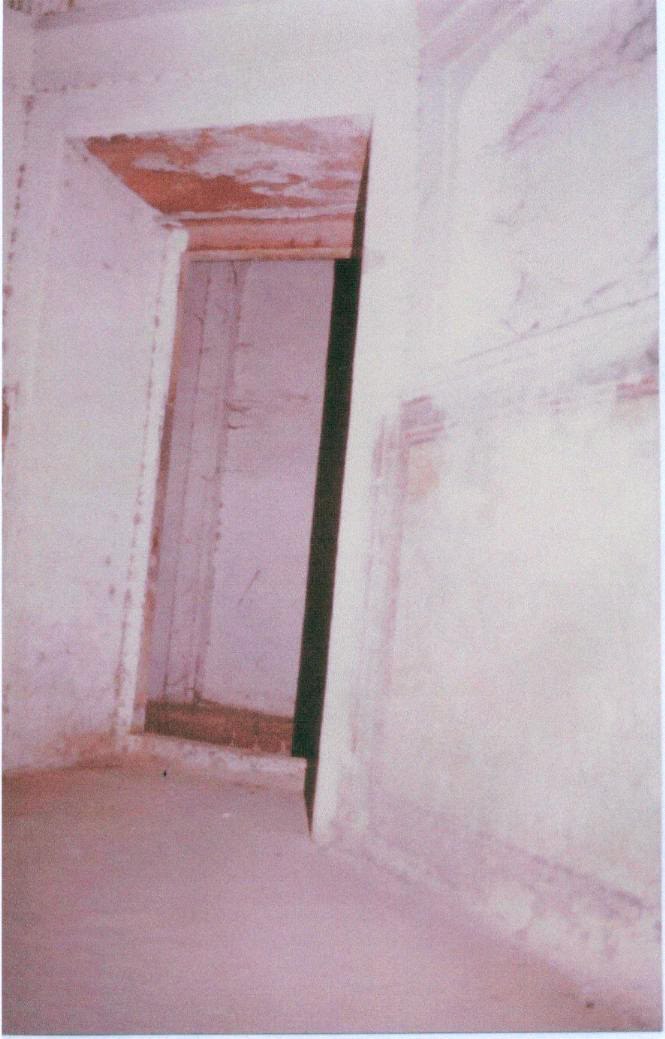 Here is a typical tower (Burj) that is in familiar Rajput style, not Islamic in any way.
You can refer to any building built by rajputs it will resemble this…. 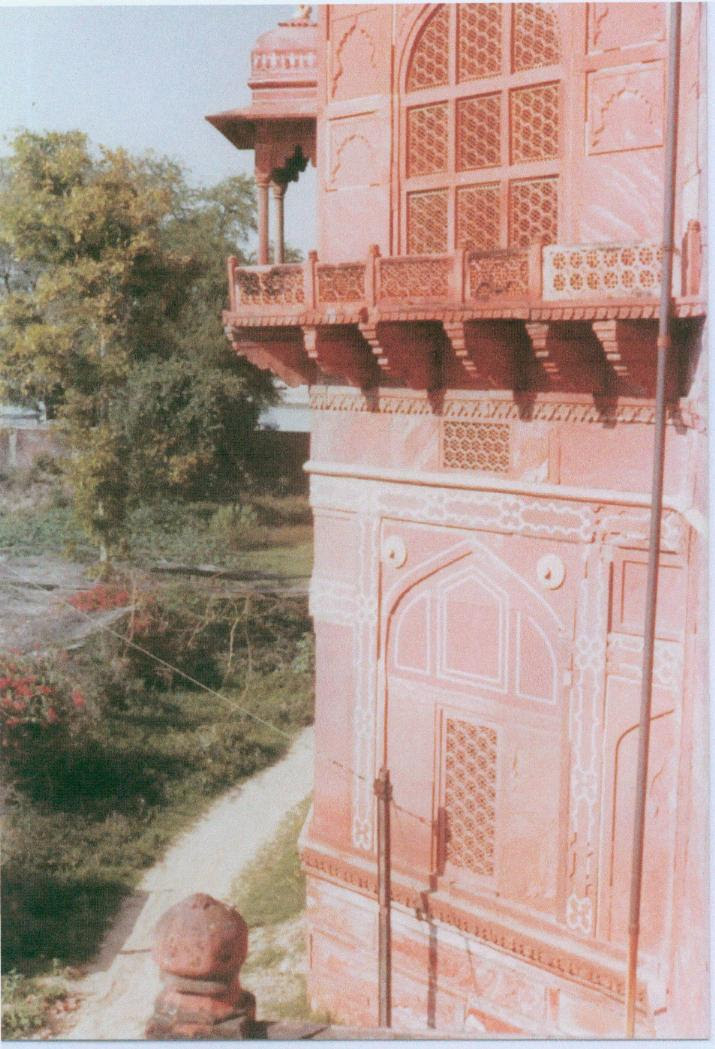 NOW READ THIS…….
No one has ever challenged it except Prof. P. N. Oak, who believes the
whole world has been duped. In his book Taj Mahal: The True Story, Oak says the   Taj Mahal is not Queen Mumtaz’s tomb but an ancient Hindu temple palace of   Lord Shiva (then known as Tejo Mahalaya ) . In the course of his research Oak discovered that the Shiva temple palace was usurped by Shah Jahan from then Maharaja of Jaipur, Jai Singh. In his own court chronicle, Badshahnama,   Shah Jahan admits that an exceptionally beautiful grand mansion in Agra was taken from Jai SIngh for Mumtaz’s burial . The ex-Maharaja of Jaipur still
retains in his secret collection two orders from Shah Jahan for
surrendering the Taj building. Using captured temples and mansions, as a burial place for   dead courtiers and royalty was a common practice among Muslim rulers.
For example, Humayun,Akbar, Etmud-ud-Daula and Safdarjung are all buried in such mansions. Oak’s inquiries began with the name of Taj Mahal. He says the term ‘ Mahal ‘ has never been used for a building in any Muslim countries from Afghanisthan to Algeria. ‘The unusual explanation that the term Taj   Mahal derives from Mumtaz Mahal was illogical in atleast two respects.
Firstly, her name was never Mumtaz Mahal but Mumtaz-ul-Zamani,’ he writes.
Secondly, one cannot omit the first three letters ‘Mum’ from a woman’s name to derive the remainder as the name for the building.’Taj Mahal, he claims, is a corrupt version of Tejo Mahalaya, or Lord Shiva’s Palace . Oak also says the love story of Mumtaz and Shah Jahan is a fairy tale created by  court sycophants, blundering historians and sloppy archaeologists . Not a single royal chronicle of Shah Jahan’s time corroborates the love story.
Furthermore, Oak cites several documents suggesting the Taj Mahal predates Shah Jahan’s era, and was a temple dedicated to Shiva, worshipped by Rajputs of Agra city. For example, Prof. Marvin Miller of New York took a few   samples from the riverside doorway of the Taj. Carbon dating tests revealed that the door was 300 years older than Shah Jahan. European traveler Johan Albert Mandelslo,who visited Agra in 1638 (only seven years after Mumtaz’s death), describes the life of the cit y in his memoirs. But he makes no reference to the Taj Mahal being built. The writings of Peter Mundy, an English visitor to Agra within a year of Mumtaz’s death, also suggest the Taj was a noteworthy building well before Shah Jahan’s time.
Prof. Oak points out a number of design and architectural inconsistencies that support the belief of the Taj Mahal being a typical Hindu temple  rather   than a mausoleum. Many rooms in the Taj ! Mahal have remained sealed since Shah Jahan’s time and are still inaccessible to the public . Oak asserts they contain a headless statue of Lord Shiva and other objects commonly used for worship rituals in Hindu temples … Fearing political backlash, government tried to have Prof. Oak’s book withdrawn from the bookstores, and threatened the Indian publisher of the first edition dire consequences . There is only one way to discredit or   validate Oak’s research.
The current government should open the sealed rooms of the Taj Mahal under U.N. supervision, and let international experts investigate.
Its not just taj mahal but even the red fort
The 5th generation Mogul emperor Shahjahan is credited with having built the Red Fort in Delhi. Shahjahan ascended the throne in 1628 A.D. This contemporary painting shows him receiving the Persian ambassador in 1628 itself, in the Diwan-i-Aam (Common Room) of the Red Fort itself. This painting preserved in the Bodleian Library, Oxford, was reproduced in the Illustrated Weekly of India (page 32) of March 14, 1971. Since Shahjahan was in the fort in the year of his accession, this documentary evidence disproves the notion that he built the fort. Compare with this the photo of the tablet in English raised inside the fort by the Govt. of India’s archaeology department asserting that Shahjahan built the fort during 1639-48. This is emphatic proof of Indian history having been thoroughly falsified during Muslim rule in India. 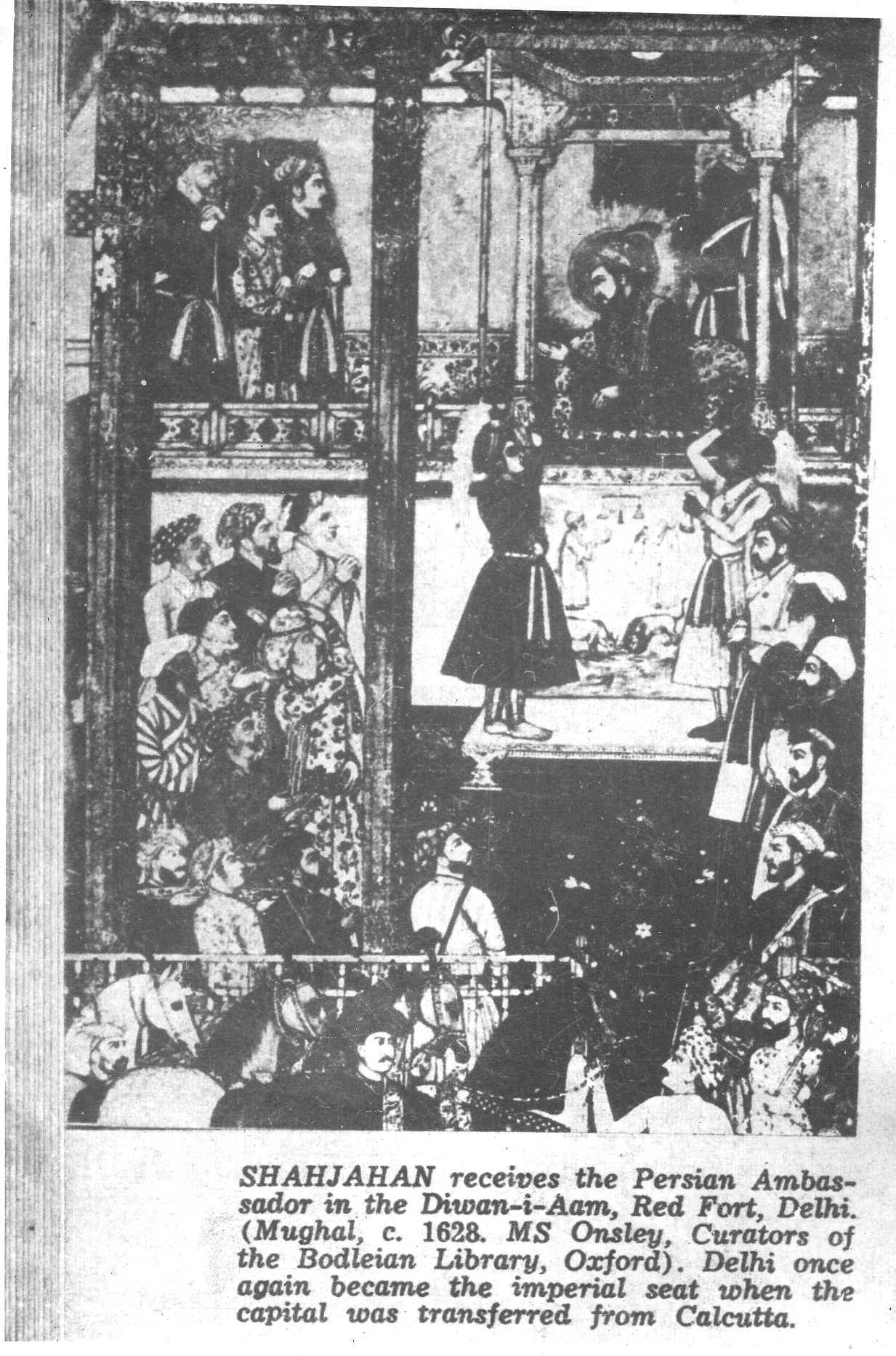 The Red Fort in Delhi has in its Khas Mahal, alias the King’s apartment, the royal emblem of its builder King Anangoal. It consists of a pair of swords laid hilt to hilt curving upwards, the sacred Hindu pot (kalash) above the hilts, a lotus bud and a pair of scales of justice balanced over it. Dotted around are representations of the sun from whom Indian ruling dynasties claimed descent. At the sword points are two small conches considered sacred in Hindu tradition. Bigger conches may be seen at the left and right corners at the base.
This royal Hindu insignia of the Hindu king who built Delhi’s Red Fort, is still there in the Khas Mahal pavilion. But even this visual symbol has been blatantly misinterpreted. The two swords laid hilt to hilt, curving upward are being inadvertently styled by ignorant guides, archaeologists and historians as an Islamic crescent. The sacred Hindu Kalash (water pot) on the hilts is never noticed. The lotus bud on the kalash represents royal wealth. The pair of scales is symbolic of impartial justice. 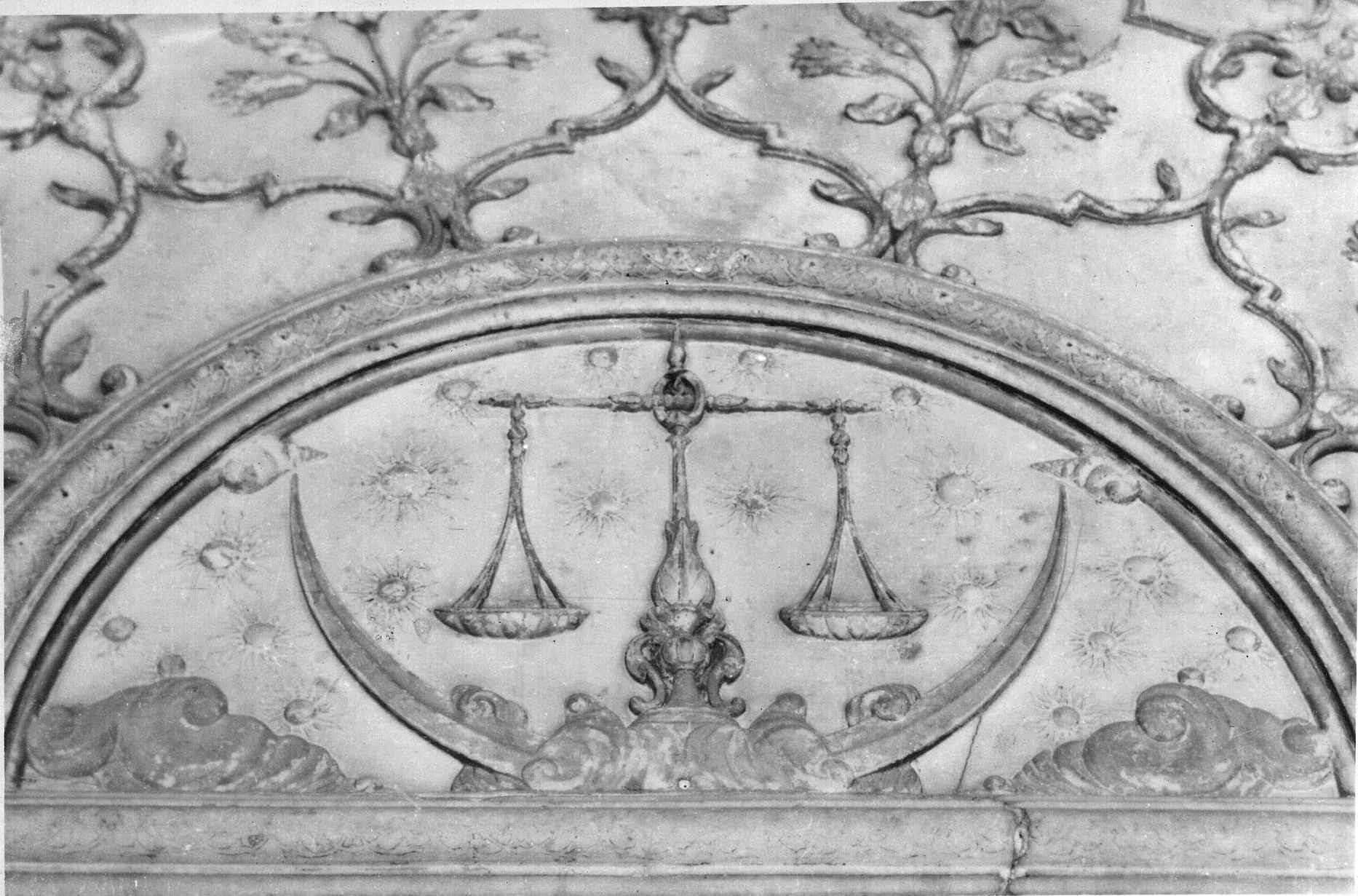 The conical arch seen in Indian forts, palaces and temples though of native Hindu origin has been mistaken and misrepresented by erring Western scholars as Saracenic i.e. Muslim. This photo of a Saudi Arabian currency note shows the typical Muslim arch which is quite different from the conical Hindu arch. Had historic buildings in India been of Islamic origin they should have had such arches. In the top right corner is a palm tree and crossed, face-down swords. Even this typically Islamic motif exists nowhere on historic buildings in India.
and many others….
SOme other points to consider

Popular posts from this blog